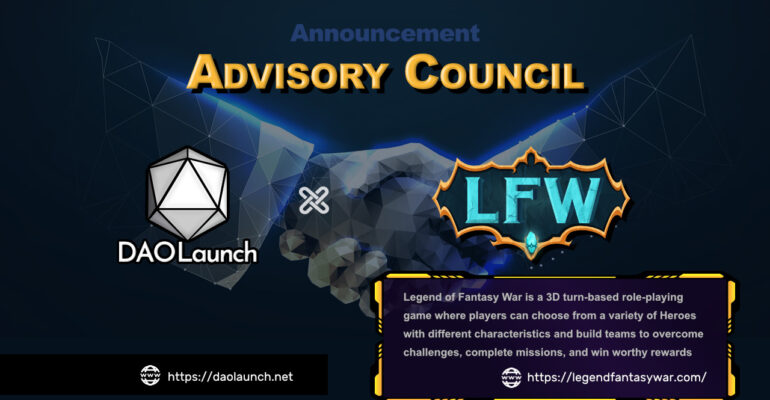 Dear community, DAOLaunch is very happy to announce that LFW is the newest member in our Advisory Council!

Legends of Fantasy War (LFW) is a leading GameFi project whose team is made up of great talents from all over the world. LFW’s CEO, Thomas Lang, has had more than 13 years of experience in game making and 7 years in crypto. The COO has 18+ years of experience working in the gaming industry, and has close connections with top tech firms such as NVIDIA, ASUS, INTEL, AMD as well as with gaming KOLs from South-east Asia. The rest of the team has great experiences in Game development, blockchain integration, IT solutions and marketing.

LFW is not just looking to develop the Legends of Fantasy War game only, but their vision is way further than that. Through this project, LFW wants to contribute to the whole blockchain community.

LFW Blockchain Research Lab (LBL), led by Dr. Xavier Taylor, is an exclusive, inseparable part of the project. Going in the direction of in-depth research, participating in hackathons, solving practical problems by applying blockchain technology; LBL targets to make LFW into a standard blockchain game, gaining its first-mover advantage. A current team of a dozen experts, LBL has a large and diverse skill set to perform full-stack projects from writing smart contracts, building applications, deploying on the platform and developing front-end apps to interact with the end-users.

And above all, LFW has their own DeFi center that offers all kinds of DeFi services including staking, farming & NFT marketplace, etc.

With a team so experienced and an ecosystem so diverse, LFW offers advisory services in terms of due diligence, VC and partnership connections. DAOLaunch highly values LFW as the next member in our advisory council and is looking forward to working with LFW to bring DAOLaunch to new heights.

About Legend of Fantasy War

Legend of Fantasy War is a unique 3D turn-based role-playing online blockchain game. By blockchainizing in-game items, the game provides players ownership of  in-game items by owning so-called Non-Fungible Token (NFT). With an engaging storyline, players can both entertain themselves and collect valuable items, even increase the value of items while playing games solo or with others. Thanks to the blockchain of items, owners of NFTs can sell, exchange, and auction transparently on the Legend of Fantasy War NFT marketplace. One of the strengths of the game is the nature of the community. Thus, the game offers a fantastic mechanism that the player and their friends can enjoy the rewards together forever. In short, the game is easy to play and collect valuable items.