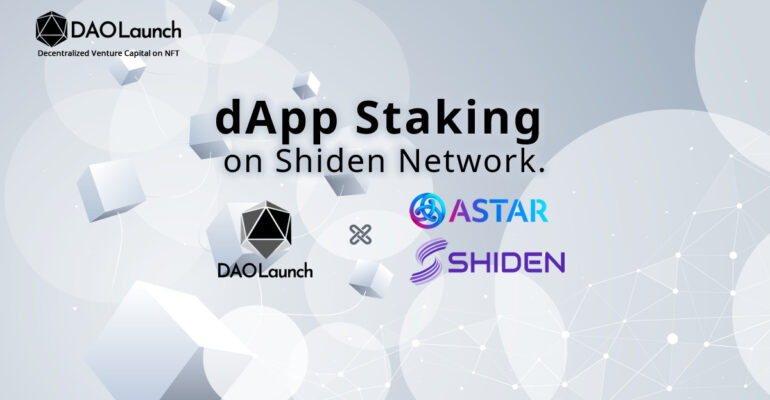 DAOLaunch has been unanimously adopted by Stake Technologies, the company which develops the Shiden Network, into the “Astar/Shiden Network Builders Program”. The program focuses on a developer-first network, also known as to the groundbreaking mechanism “dApp Staking” to support developers.

In addition, with the aim of attracting new users from the Shiden community that is expanding all over the world, we will hold two campaigns; kickback to users from the staking reward received by DAO Launch and NFT airdrop.

* The distribution ratio of staking rewards is usually as follows.
Developer: Staking user = 4: 1

* Up to 512 people can participate in each dApp.

Of the rewards (SDN tokens) that DAOLaunch receives from “dApp Staking”, 25% will be returned to users.
As a result, the reward that the user receives will be “twice the normal amount”.

If DAOLaunch receives a reward of $ 4,000
The reward for all staking users is $ 1,000,
The campaign will increase the amount to $ 2,000.
* The actual reward will be the amount prorated according to the number of users and the amount of staking with respect to the total reward.
* All items will be received at a considerable amount of SDN.

d.) Apply from the form that will be announced at a later date

* The return rate is subject to change.
* The campaign period will be December 2021.
* In case of extension, an announcement will be made separately.

All 5 types of limited NFTs will be air-dropped to the participants of this campaign.
Five participants will be selected by lottery and presented as gifts.
* The above image may differ from the NFT that is actually distributed.

d.) Apply from the form that will be announced at a later date

The Protection of Investors and More – Informational Series 2