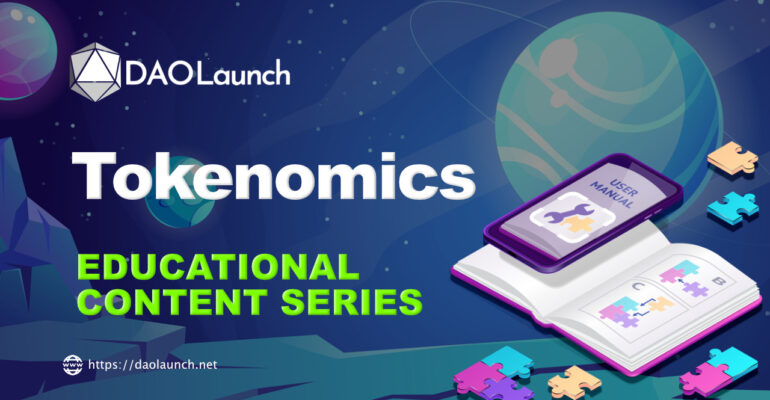 Tokenomics can be described as the science of the token economy. The word was coined by pairing the word ‘token’ and ‘economics’ together. One of the earliest uses of the term tokenomics concerning cryptography can be found in the 2017 Medium article by William Mougayar in an article titled, Tokenomics — A Business Guide to Token Usage, Utility and Value.

Tokenomics have become essential to every crypto project with a native token that’s meant to be exchanged. They have transitioned from indicating how a project plans to utilize its tokens to defining its future because tokenomics are closely linked to a project’s roadmap, business model and funding schedules. The tokenomics of the project can often tell you what the outlook of its future is, thus making differentiating between a good and bad one important. With many bad actors in the cryptosphere, it has become difficult to differentiate the two. Whilst it remains nearly impossible to get it right most of the time, we’ve got some tips and tricks to help you weed out the bad actors and bad tokenomics. This is not financial advice.

In 2017, Initial Coin Offerings (ICOs) made waves for the insane funding valuations they garnered new projects, amidst the majority of them being exit scams and rug pulls. The idea of raising capital against equity was quickly drowned by the possibility of raising funds without touching a single percent of a company’s equity. Enter ICOs. It is estimated that in 2018, over 900 crypto projects raised a combined $21.7 billion through token issuance. The added value to this method of raising funds includes the freedom project owners had with these funds compared to the stringent reporting and oversight often required by traditional Venture Capital Firms.

2020 proved that the token economy was poised to shine. ICOs took a new form in STOs, and so continues the cycle. IDOs have provided a safer method for retail investors to financially back their favourite projects in exchange for tokens, but rug pulls and exits loom above all of crypto. The goal of legitimate projects has always been to safeguard retail investors and at DAOLaunch, we pride ourselves on ensuring that every project we launch goes through a vigorous Due Diligence process. With this being said, it is not 100% possible for us and many other projects to weed out bad actors, and as such, we would like our users to note the risks associated with joining our IDOs and any other platform’s IDOs.

The term is a familiar one in both crypto and traditional projects. Traditional companies often give early employees vested shares which they can only get the full right to after a certain time. These vested shares are dispersed with a lock period to investors and co-founders in order to keep them attached to the project over a certain period.

Vesting is the process of locking and distributing tokens over a certain period to avoid tokens being dumped. Private rounds usually have a longer vesting period as this would be allocated to private investors such as VCs. Public sales have shorter rounds, with the average time being 3 – 5 months. Projects with little to no vesting period often lead to a large sell-off, leading to a crash of the token’s price.

It is important to note that the tokenomics of a project doesn’t stand alone, it stands with an actual business that has to deliver a product or service to generate income. As such, the project has to have a market fit that puts it in a position to succeed. Investing in a project without understanding its business plan, mission and goals is a high risk. A project cannot succeed with a business plan that doesn’t have a good fit in the market.

A good market fit can be determined by doing market research on competitors in the space that aim to solve the same problem, as well as researching customer demand.

Projects are more likely to succeed with teams that are well-experienced in their field of work. Education also goes a long way, but the experience is the golden egg. Experienced teams often know how to solve industry problems better than inexperienced teams. VCs also often refer to the team’s experience to ensure that they’re backing a project with a strong team. It is a golden rule in the VC world to ensure that the team is well-tooled to handle the requested capital.

It is important that your desired project gets its smartcontract audited. An audit ensures that the project’s smartcontract does not have security vulnerabilities that place the software at risk of being exploited – which could ultimately affect the funds you would have invested! It is equally important to ensure that you perform a due diligence check with projects that have claimed to be audited by leading auditing software companies such as Certik and ConsenSys Diligence. It is important to visit the auditors website and search for the project to make sure their claims are accurate.

The Good, The Bad and The Ugly

The following tokenomics are from projects that we have either admire from afar, directly interacted with, or seen in passing. The project names will not be revealed for confidentiality reasons.

The Good Tokenomics: Case study A Case Study A has a sizeable amount of tokens allocated to its userbase at 27% which is good as it indicates that the public has an opportunity to fairly acquire tokens through launchpads and other publicly accessible means.

The allocation of 33% to its ecosystem is great, it’s an amount that’s not too high or low, it’s usual to see. The 33% going to the dev team is also a good allocation due to the importance of tech in any crypto project.

The community members’ allocation at 5% is good because it will most likely be rewards offered to members that strengthen the community. The 10% going to treasure is good. The 2% allocated to Legal and Advisors makes sense because they have not allocated too much to them which some projects tend to do.

The vesting schedule from Case Study A’s tokenomics works well and is an industry-standard. Private sale investors usually have a longer cliff period eg. 9 – 16 months. This avoids investors unlocking huge sums of liquidity and dumping on the public sale investors.

The public sale investors have a 20% unlock at TGE, followed by a monthly release of 20%

This public vesting schedule works well, with a common structure being a 25% unlock at TGE, followed by 25% monthly. This unlock strategy ensures that the tokens unlock in a manner that avoids massive dumps which ultimately make the price unsteady.

Whilst we’re not at the liberty of disclosing full project information, Case Study A’s token utility works well for its overall token usage. Projects are required to add utility in a manner that sustains the token’s usage over time and cultivates its audience through use cases that make it easy to support, as well as also adding value to the business’s strategy and goals. Case Study A’s token supply sits at 100M, which would be very difficult to justify a project with a token that does not have utility. Projects with good utilities also manage to avoid massive sell-offs due to community excitement at what their tokens can allow them to do.

The Bad: Case Study B

Case Study B is considered a bad tokenomics because of its General Allocation of Tokens and its Vesting Schedule.

The seed round and the private sale round sit at a respective 5% and 14% but are very similar as they’re both usually allocated to VCs so we’ll combine them which will mean 19% will be going to VCs. The red flag flashes brightly when you note that a minuscule 2% is offered to the public vs. 19% to private parties. The private investor to public investor ratio is a distasteful contrast as it aggressively undermines the community.

The disparity of project ownership between private and public partners does not empower the community to make decisions that allow this project to operate in a truly decentralized manner. It also indicates a distrust with its members or a lack of understanding of how tokenomics should be put together. Whilst VCs have been considered a driving force for providing liquidity that assists a lot of projects to take off at early phasis, Web3 technology has placed the community in a position to become just as important as a VC at early stages. Case Study B fails to pick that up as an important tool to its project.

Case Study B’s vesting schedule is moderate. The public sale’s vesting schedule as 25% at TGE and 25% thereafter are commonplace. This vesting schedule is favorable because it avoids a token dump which could negatively affect a project, and it’s structured in a way that doesn’t make the retail investors wait on their investment for too long. The tokenomics takes a questionable path with the seed round and private sale unlock amounts at TGE, and the vesting periods. Receiving 5% of a token at TGE is very low and unattractive to a VC.

The 3-month cliff which is recommended follows a 24-month linear release which is long and can seem unending. There has been an increase in projects with 24 – 36 month vesting period but this would require an extremely competitive project backed by an investor that believes in its long-term vision. Additionally, a lot can happen in crypto in 24 months, who wants to wait that long? A recommended vesting period for a VC sits around 12 – 20 months. 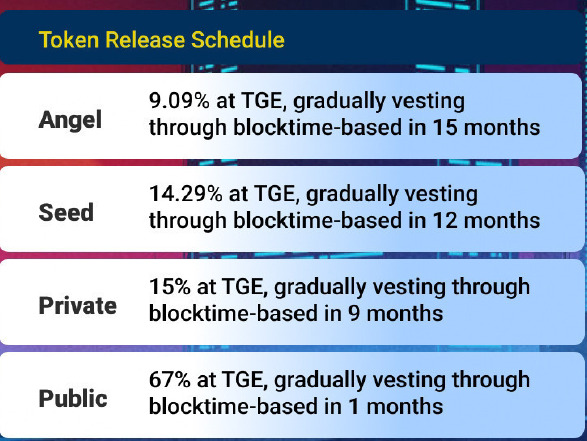 Case Study C’s tokenomics is considered very bad because of its General Allocation of Tokens and its Vesting Schedule.

Case Study C’s tokenomics does the mistake of throwing in a lot of unnecessary titles for the same function. The 1% Airdrop can be merged into marketing’s 15% to become 16%. The 4.17% private sale, the 2.00% seed round and the 1.67% angel round can all be merged into a single 7.84% private sale/seed round column.

Case Study C’s tokenomics are highlighted by Twitter user @cobie in a similar analysis of a different project: 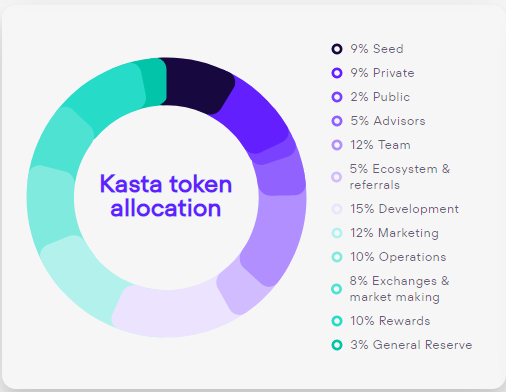 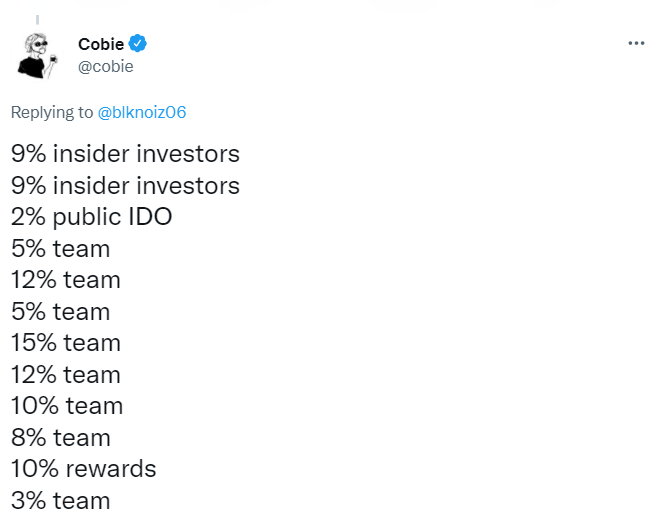 The angel, seed and private rounds have an acceptable unlock at TGE and a common vesting schedule. The biggest problem this tokenomics faces is the public sales vesting schedule. 67% at TGE and 1 Month Vesting! Even though the public sale’s allocation accounts for 0.83% of the entire token allocation,  67% TGE will lead to retail investors extracting too much liquidity out of the system and ultimately leading to the token’s crash. As a retail investor, this means the value of your token ownership could be diluted in 60 days flat. There isn’t a justifiable reason why 67% of a token’s value should be released at TGE. It can point to a team that’s inexperienced in creating tokenomonics, and ultimately a team that doesn’t understand the space well enough to encourage an investment into this project.