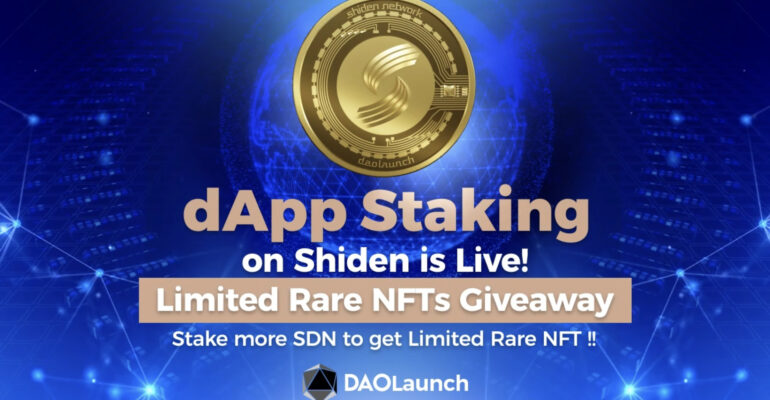 In this article, we’ll take a closer look at the “25% Kickback” and “Limited Shiden NFT” giveaways which are exclusive benefits of the dApp Staking until the end of the year.

DAOLaunch has been unanimously adopted by Stake Technologies, which develops the Shiden Network, and the Shiden community in the “Astar / Shiden Network Builders Program”. DAOLaunch is participating in the epoch-making “dApp Staking” program.

In addition, with the aim of attracting new users from the Shiden community that is expanding all over the world, we will hold two campaigns, the kickback to users from the staking reward received by DAOLaunch and the NFT airdrop. At the time of writing this article, the total amount received from the Shiden Network to DAOLaunch was 18,107 SDN ($ 66,815.00)Considering that the program has only been running for two weeks, it is an impressive amount to say the least.

This grant will be used to give back to users and provide liquidity to AMM when connecting to Shiden.

Out of the rewards (SDN tokens) that DAOLaunch receives from “dApp Staking”, 25% will be returned to users, double the usual reward.

The “25% kickback campaign” will be held until the end of the year.

If you want more rewards, stake on DAOLaunch.

At dApp Staking, we will present a “Limited Shiden NFT” specially made for those who support DAOLaunch during the dAPP staking program.

This NFT will also be provided with a utility as a DVC-NFT on the DAOLaunch platform.

Regarding the total staked amount of each address, snapshots will be taken three times irregularly between November 1st and November 10th, and the average value will determine the top 7 addresses.

For the accounts that meet the participation conditions as of November 10, 5 people in the lottery and the top 7 accounts in total staking will be confirmed.

“Shiden Limited NFT” will be distributed within a week after the decision.

What is Shiden Limited NFT?

* It is not an official NFT of the Shiden Network. b.) Join our Telegram
https://t.me/daolaunchcommunity

e.) Apply from the form below
https://forms.gle/BTHYUsECs58LMU428

* The distribution ratio of staking rewards is usually as follows.
Developer: Staking user = 4: 1

* Up to 512 people can participate in each dApp.

DAOLaunch connects challenging entrepreneurs and individuals directly on the blockchain to support investors, allowing anyone across national borders to seamlessly create and support new financial products.
We are interested in start-up companies that are considering alternative fundraising methods. DAOLaunch will provide marketing support up till and after you complete your fundraising rounds. We will also provide marketing services on your behalf through our new and exclusive “NFT Farm” Function.