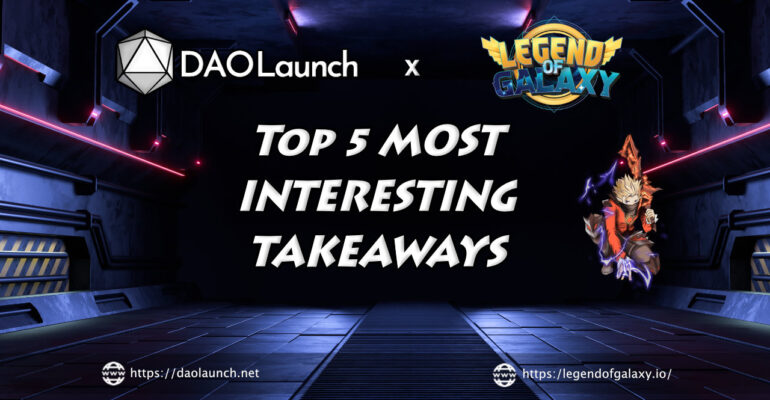 💹 $GAE listing: TBA ⏰ $GAE tokens will be automatically sent to your wallet (at time of claiming) 💰Vesting: 100% at TGE.

LOG has an interesting world and we would like you to dive deep into it. These are the Top 5 Mos Interesting Takeaways from Legend of Galaxy. LOG’s gameplay is appealing and has a lower barrier to join. Players can recruit more than 100 unique heroes to battle the evil and claim their territory in a cosmic theme world. The game will see multiple updates with the addition of new heroes and mechanics. More importantly, an NFT Marketplace will be a crucial part of the project, which is a great place for you to trade, exchange and make profits. The Legend of Galaxy gameplay aims to build on these main functions: Mystery Box, Marketplace, NFTs, and multiple game features such as Challenges, PVE Campaigns and Daily Quests. Apart from Legend of Galaxy, there are more products on the way on the LFW Gamehub. DAOLaunch is also in partnership with LFW!

As you know, the Gamehub itself will contain various games that are interconnected and one can benefit from the other. This sustainable concept promises to bring various utility to the platform as well as its products.

Inflation is one of the biggest problems that most NFT games face. After becoming aware of this issue, the LOG team conducted in-depth research and promoted a first-ever innovative deflationary model in gamefi to generate passive income for token holders, and burning tokens appropriately. Together with multiple token utilities in-game, play-to-earn incentives, and the NFT 2.0 economy, they believe that this model can solve the headaches issues of inflation in blockchain game projects, and maximize the benefits for token holders.

About Legend of Galaxy Legend of Galaxy is an appealing blockchain game with personalized NFT integrated in LFW Gamehub and ecosystem toward a true metaverse for the community. Players will embark on a galactic adventure, collecting stylish and powerful NFT hero cards as rewards of fierce battles. Everyone is free to explore the galaxy, team up with friends and build forces to wage wars against other clans for valuable lands.

As an NFT game, Legend of Galaxy aims to fulfil the very core idea of NFT, which is giving players true ownership and complete control over their in-game assets. With the community-first approach, we strive to create the top blockchain game experience with enriched economic model in a metaverse ecosystem, which provides various values and benefits for our players, partners and investors. Scorefam is The Next to Conduct Public Sale on DAOLaunch