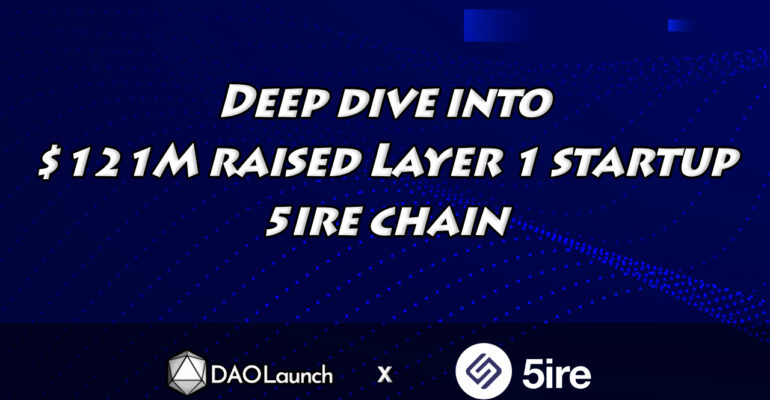 Layer 1s are arguably the most innovative and exciting projects in the crypto industry. There are currently over 100  different Layer1 projects competing for the 2T market share. This article will take a deep dive into 5ireChain and assess the current state of the market as well as 5ireChains ability to be a future L1.

Despite the $2T+ market, two projects, Bitcoin and Ethereum, currently account for over 50% of the total. Most of the new Layer 1 projects entering the market are projects trying to break Ethereum’s monopoly (so they are often referred to as Ethereum Killers).

New Layer1 projects are dramatically easing into Ethereum’s monopoly over the past two years. The Total Value Locked (TVL), a measure of assets deposited in the protocol, shows that at the start of 2021, Ethereum had 97% of the total smart contract market at the start of 2021; as of May 2022, that number is 50.79 %. Gradually, non-Ethereum chains are gaining momentum. 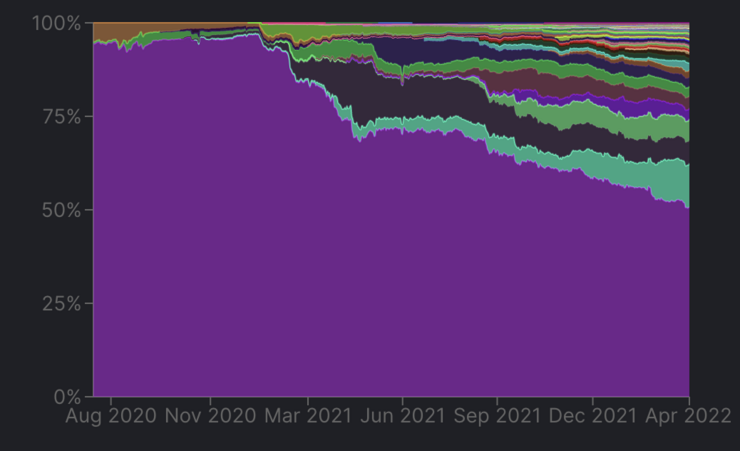 The Layer 1 project we are presenting here, 5ire Chain (pronounced firechain), is a Layer 1 project from India in the same league as Near, Avalanche, Solana, and Fantom. This article will take a deep dive into 5ireChain research; from the demand and supply side of tokens, evaluating the potential of 5ire chain in delivering a High ROI, as well as basic information about the team, vision, technology, investors, ecosystem, tokenomics, etc.

5ireChain was founded in 2021 by Pratik Gauri, a serial entrepreneur, and investor, Prateek Dwivedi, who serves as CMO, and Vilma Mattilda, a prominent VC and early investor in TRON.
5ireChain is a “Layer1 blockchain platform that enables companies to be more sustainable and innovative, and aims to accelerate the penetration of the UN’s 2030 Agenda for Sustainable Development Goals (known hereafter as SDG)“.

To achieve this, 5ire chain has designed a unique and novel consensus mechanism called the: Sustainable Proof of Stake (SPoS), which ensures that companies are financially rewarded for their sustainable actions in line with the SDGs. This fosters sustainability and encourages decision-making that supports the 17 SDGs and is more beneficial than actions that go against the (SDG) paradigm.
At its crux, what 5ireChain is trying to do is to create a financial mechanism whereby companies can achieve and motivate sustainable behavior through the design and innovation of blockchain economics.

So how will such actions in line with the SDGs actually be evaluated by a consensus algorithm and distributed as rewards? Is this achievable, sustainable, and can 5ireChain capture and sustain market share?

If you are not yet familiar with PoW, PoS, and consensus algorithms, please read this article first before continuing
“Proof of work” and “proof of stake” are the two major consensus mechanisms cryptocurrencies use to verify new transactions, add them to the blockchain, and create new tokens.

5ireChain is designed with a different mechanism than Bitcoin’s Proof of Work (PoW) called SPoS (Sustainable Proof of Stake), which will be implemented in Ethereum.
The reason for this is that the 5ireChain team felt that both PoW’s high power consumption and PoS’s weight of votes based on staked wallet holdings were deeply problematic.

PoW is problematic due to the high energy consumption of the consensus algorithm. As the demand for power used for mining has increased exponentially over the past few years so has the negative effects on the environment. Some areas in Iran, which account for 4.5% of bitcoin mining, have been forced to switch to using fuels that heavily pollute the atmosphere to replace the power lost from mining. There are reports of record-high pollution levels in some cities. (On the other hand, there are reports that bitcoin is improving environmental problems.)

PoS has emerged as an alternative consensus algorithm that aims to replace PoW, but there is a problem here as well, and it could lead to a “the rich get richer” scenario. This is because the nature of the PoS mechanism is such that the probability of successful mining depends on the “amount of holdings and the number of years of ownership”. This means that it is easier to reward users who own a large amount of cryptocurrency in the network. Furthermore, PoS has both a high technical/knowledge and economic barriers to entry, leading to a centralized structure that is biassed toward a few validators. In fact, PoS developers advocate a decentralized operation with fair participation, but most projects are in a state of some kind of centralized operation with a small number of validators who have full participation rights. Projects with a large number of validators also frequently establish pools in order to reduce revenue variability and take advantage of economies of scale. In many cases, these pools are off-chain. 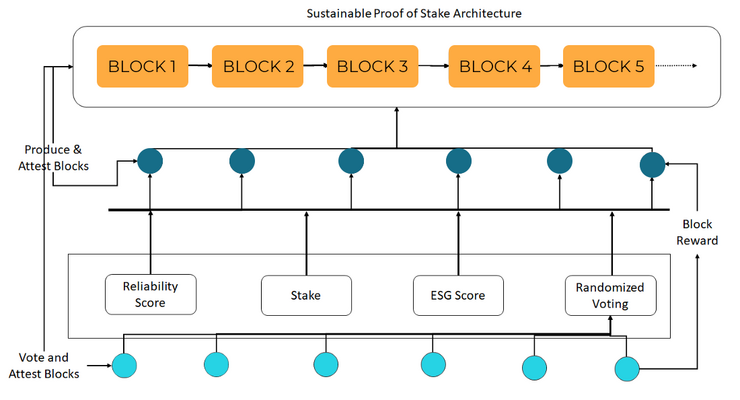 To combat this problem, 5ireChain has developed Sustainable Proof of Stake (SPoS), which is a consensus algorithm that takes into account multiple factors other than the “staked amount”, and can solve the problem of the centralized structure of some validators.
SPoS is based on Stake Amount, Reliability Score, Randomised Voting, Sustainability Score (Environmental, Social & Governance), and Previous Nomination. The system is more decentralized, taking into account multiple factors other than simply the amount of tokens held.
In SPoS, the node that gets the maximum weight is selected to assemble the block for the next 12 hours, and then the process of selecting subsequent nodes begins again. The figure below outlines each element and its corresponding weight. 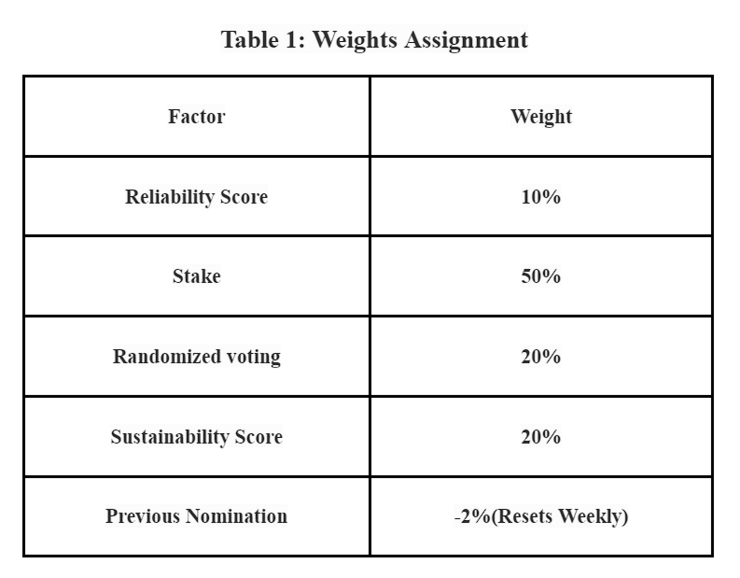 SPoS ensures that nodes with higher Stake quantities get higher priority, but to make it more decentralized and democratic, the algorithm is designed so the stake quantity should not be the sole criterion for selecting a node.

The impact of using the Stake amount as a node selection criterion is that it prevents participation by nodes with smaller Stake amounts and nodes that cannot force other nodes to nominate them.
In the SPoS mechanism, loyal nodes that are always present and hold a stake for a longer period of time are rewarded. Similarly, the mechanism ensures that ESG compliance further rewards nodes that exist for the benefit of society as a whole.

SPoS further gives a 20% weighting to the ESG compliance requirement (Sustainability Score) and uses Randomised Voting to make node selection more democratic. 20% weighted Randomised Voting allows for participants with smaller amounts of tokens to enter as it is guaranteed that nodes with stakes will be selected to assemble the block. This 20% weighting helps to prevent cartelization of the network as nodes nominate or delegate their stakes to their favorite node each time.

Along with Randomised Voting, nodes are assigned a reliability score based on the time the node was online and held a stake at the time of voting. This incentivizes participation in all networks. (Reliability Score)
The proposed consensus mechanism will consider a sustainability score consisting of the environmental, social, and governance scores of the organizations and individuals operating the nodes. (Sustainability Score). In the initial phase, these scores would be assigned according to reliable inputs obtained from trusted authorities. Thereafter, a decentralized mechanism will be put in place to assign and update the Sustainability Score once the 5ire ecosystem is stable.
This weighting of factors other than stake amount seems to be the reason for the original development of SPoS, to ensure democratic participation of smaller nodes and to make the whole chain more sustainable.

Like many Layer 1 projects since Ethereum, 5ireChain has received significant VC backing from the beginning. It has had two major fundraisings so far, with the first raising $21M and the second raising $100M for a total of $121M.

The first round was led by Sanctum Global Ventures whereas the second had The Global Emerging Markets Group (GEM) as the lead investor.
https://www.crunchbase.com/ organization/5ire/company_financials

5ire funding: Blockchain startup 5ire secures $100 million capital commitment from GEM – The Economic Times
The platform plans to use the fresh funds for the expansion of the ecosystem, which involves liaising with government stakeholders in India and upcoming international markets, investing in technology and resources, hiring, and enhancing the adoption of 5ireChain. 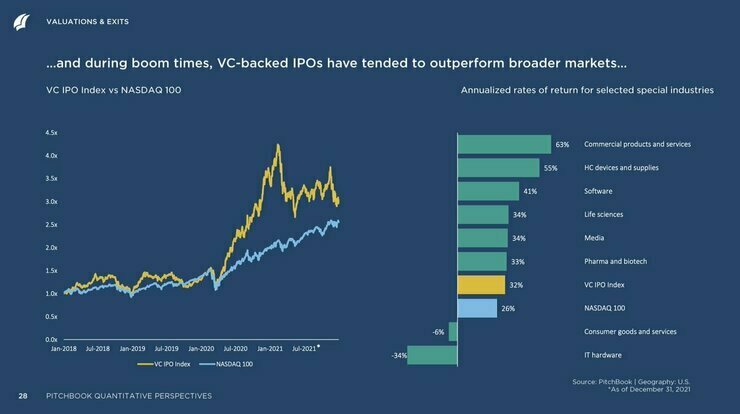 Also, as far as ROI is concerned, looking at the ROI of Layer 1 in cryptorank, the ROI below 1x (below cost) was mostly seen during the ICO bubble in 2017-2018, and this is because the procurement was done before the product was ready and the company either withdrew due to lack of budget or the product was not technically or economically feasible. There is only one private project that has raised over $100M from VC since 2018 with an ROI of less than 1x.
This suggests that raising $121M would likely have a positive impact on the expected ROI.

The most important thing for a Layer 1 project is the ability to attract quality startup projects onto its own chain; the demand for 5ireChain tokens is determined by the projects on 5ireChain. That is why many Layer1 projects have set up grants and ecosystem funds.
5ireChain has also established a $10M fund known as 5ire Capital and is quickly attracting projects to build on the 5ire blockchain.

Use Case: Looking at 5ireChain’s tokenomics, 5IRE tokens have governance, staking, and other network utilities (exchange medium, etc.) as their use case. The following 3, which will be looked at in more detail, are important.

Economics (Mint&Burn): 5ireChain is a fixed supply token and incorporates a dynamic mint and burn mechanism which takes into account the inflation rate of the token.
Governance: tokens are used as voting rights, allowing holders to express their opinions on governance decisions through referendums.

Staking: used to incentivize validators based on the Staking SPoS compensation design mechanism The amount that the team receives is less compared to other Layer 1 projects. As for cliff/vesting, the team and advisors have also had the longest cliff/vesting. Compared to other Layer 1 projects, we found no change in both cliff/vesting duration. The only thing that concerns me is that the percentage of public sales is smaller when compared to private sales, and in the case of public sales, tokens are not distributed at the time of TGE.

Legend of Galaxy by LFW is Having Their IDO on DAOLaunch

How to Claim Tickets on DAOLaunch and Join the OchanoMizu Festival