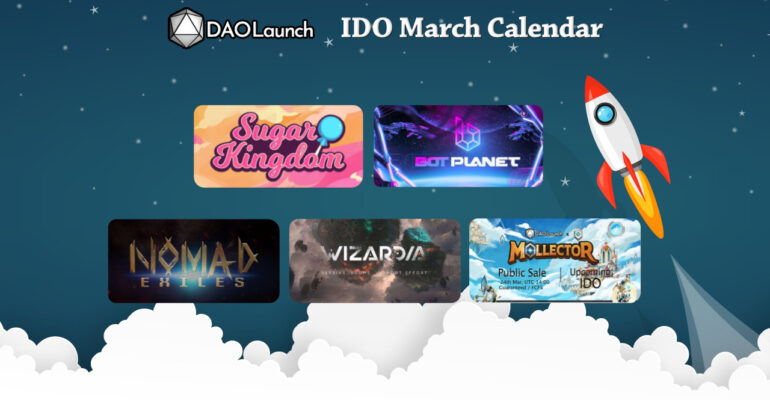 We’re excited to announce the official IDO calendar for the month of March. The calendar presents quality projects that we have taken our time to vet in order to ensure our community loves them ✅

Sugar Kingdom is not just a game for those who are blockchain users. But it’s a game that could introduce blockchain to millions of players.

Besides enjoying addictive and immersive gameplay, players are the real owners of the items inside the game, and they are able to exchange them with other players and obtain real, attractive and significant rewards according to their total playtime. Later, they can invest these earnings in the different economic systems that coexist within the platform. It is a concept that not only challenges blockchain games, but it also defies traditional games.

The game ensures a familiar, fun and addictive experience, which is already validated by users of all ages and from all countries. At the same time, it represents a unique opportunity to explore new financial opportunities and to have control over our assets and have total freedom to manage them.

BOT GAME V0.1 – virtual card collection Play-to-Earn game. The closest existing example on the in-game mechanics would be Hearthstone by Blizzard. The user gets the access to the game, gets his NFT character, and then uses his Planet token in order to battle with other users. The winning user receives a fee minus the service commission. In the future, he can spend the token to improve the character. Purchasing NFTs or cards from the marketplace or in-game store.

Nomad Exile is an RPG game with different multiplayer mechanics. The project is based on a play-to-earn monetization model which allows players to earn in the game.The game genre is sci-fi with elements of the medieval setting (Dune, Star Wars, etc.)

Developers came up with a unique visual style combining the culture of South American tribes, such as Aztec and Mayan, with the special cyberpunk subgenre – crystalpunk, where crystals are the core of technological progress. In Nomad Exiles there’re a lot of mechanics for entertainment and income.

Playthrough of story quests, independent exploration of secrets and mysteries of the post-apocalyptic world in vast locations, battles with other players in the Arena, training and breeding the pets, building and protection of your shelter, trading on the in-game NFT market. Pride is a token that is used in the whole Pride MetaVerse system.

Each player can take part in and specialize in different game modes such as PvP and PvE battles, base-building and exploration, spellcraft and research of crafting recipes. $WZRD is the Solana-powered utility token that also acts as in-game currency and can be spent as well as earned or exchanged by every player inside and outside of the game.

Two types of valuable NFT have been announced so far, with more under development: Arena Genesis NFTs – which offer owners a royalty share from Arena battle transactions – and Wizard NFTs – player-controlled characters with unique art and in-game capabilities. Wizardia rewards those who contribute to the game’s metaverse and its real-valued economy system so there are no one-way investments.

Mollector is a Play-to-Earn digital, collectible, and auto-combat card game. The game offers an immersive experience that’s based on deckbuilding, strategy, and the Play-to-Earn approach. Inspired by the Hearthstone and Dungeon & Dragon world, Mollector takes place in an ancient faraway galaxy where warriors from 6 factions co-exist and battle to become the rulers of The New World. Players, a.k.a Mollectors travel around the Galaxy, summon warriors to compete against others, defeat the World Boss and save the Galaxy. In the game’s world, Mollectors will collect, trade, and upgrade Hero Cards to compete against others in various game modes.