The Top 5 Most Interesting Takeaways from Bot Planet 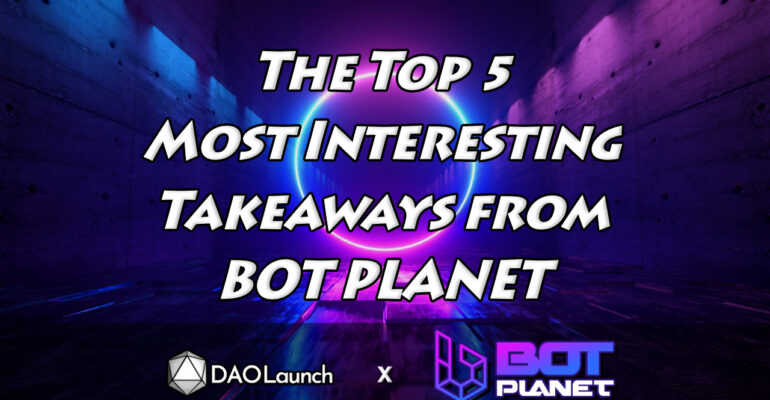 The Top 5 Most Interesting Takeaways from Bot Planet

We are incredibly excited to share with you the Top 5 Most Interesting Takeaways from our latest upcoming IDO Project: BotPlanet! DAOLaunch will host Bot Planet’s IDO on the 9 Mar, 10:00 UTC. Botpla.net ($BOT) is a multichain ecosystem built under the UX of an NFT based Play-To-Earn game. It also serves as a unique wallet with a built-in NFT Marketplace, DEX, seasonal NFT and Token AirDrops and game-based Multifunctional messenger. Botplanet arrives to go beyond just a simple play-to-earn game, it has a deep, rich lore as well as multiple factions a player can choose from.

Each faction adds a little to the BotPlanet Metaverse It is planned to implement a secure open-source decentralized messenger based on the BOTPlanet project blockchain. The idea of the messenger is that for storing data inside a distributed registry, the messenger will actually belong to all users and it will be impossible to control, censor, or block it. BotPlanet has a wide variety of well-thought-out mechanics which take inspiration from an early 2000’s card trading game.

Spells are one-time use cards that are played instantly and have an immediate effect. These effects can vary – deal direct damage, heal units and heroes, buff/debuff other cards, remove artifacts, gain temporary mana, etc.

Shift cards are special cards that can be played once every turn for health instead of mana. The player is utilizing the Nexus Shift, the inlore anomaly that is causing the apocalypse. The player pays X health to draw from a special deck of cards, each of which has a chance to alter the battlefield in unexpected ways. In crypto we always talk about incentives, well how can an early investor into Botplanet receive an ROI? BotPlanet has clearly thought about revenue streams

Botpla.net ($BOT) – is an multichain ecosystem built under the UX of an NFT-based Play-To-Earn game. Unique wallet with a built in NFT Marketplace, DEX, seasonal NFT and Token AirDrops & game-based Multifunctional messenger. The vision is simple – to create an ecosystem which welcomes a big variety of users. BOT PLANET is focusing on brining all communities in the crypto world together by offering the following: