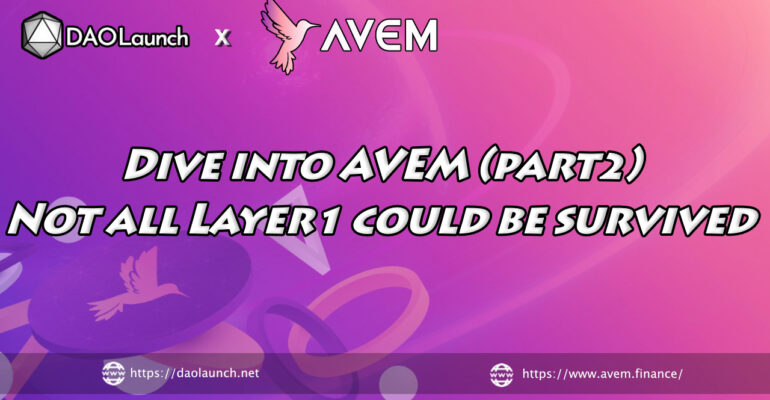 In our previous article, I explained L1’s should be a main point of your investment thesis; but not all L1s are good investments, and not every L1 will survive. The  L1s that will survive and thrive are those that can attract good startups and developers. If we can attract good startups, users will come naturally, and if users come, the ecosystem will flourish, and if the ecosystem flourishes, L1 will flourish, and this positive feedback loop turns into growth of the system. in 2021, L1 was boosted by Market Cap, due to excessive money printing and speculation, not because the L1’s flourished due to the value accrual (in contrast to the Fat Protocol Thesis).

By reasons, we mean.

While there is clearly value in layer 1 blockchain, most of the value to date has come from the fact that it cannot be valued, i.e., it has no ceiling. That makes it attractive for long-shot investments (with low probability and massive upside). Ultimately, however, the totality of applications built on the blockchain must be larger than the platform itself; the more successful applications, such as ETH-based DeFi, gaming, and NFT, the easier it is to value them in a traditional cash flow analysis. Traditional investors will flock to these investments because they are easier to value in traditional cash flow analysis.

In fact, when ETH reached a market cap of $25B and a TVL of $10B (summer 2020), the first successful consumer application (DeFi) began to gain traction. The DeFi token boomed and outperformed ETH by ~7x over the next 9 months. Games and NFT apps (and tokens) built on Ethereum were next to thrive relatively, showing significant outperformance against ETH itself. However, the L1 chains that have been gaining steam in 2021 have few killer projects like those on Ethereum for their market capitalization.

From here on out, these Layer 1s will need to succeed with a few killer apps to maintain their rising market capitalization. If these success stories materialize, the apps themselves could outperform Layer 1s, as we have seen historically with Ethereum-based apps. However, if the app does not get deployed,then the Layer 1 will likely struggle, as we have seen with ICP, EOS, ZIL, XTZ, and other disappointing Layer 1 projects. In other words, attracting good projects is critical for the  L1 to succeed.

But already more than 100 L1 chains, not every L1 can attract good projects. I believe that the chain is limited to the following areas with respect to growth.
1. Ethereum + layer2 ecosystem

2. Layer1 chains like Near, Avalanche, Solana, which can offer huge Grant and Ecosystem funds

3. Layer1 chains that can offer strengths that Ethereum does not have

Ethereum ecosystem already has the highest level of users and projects 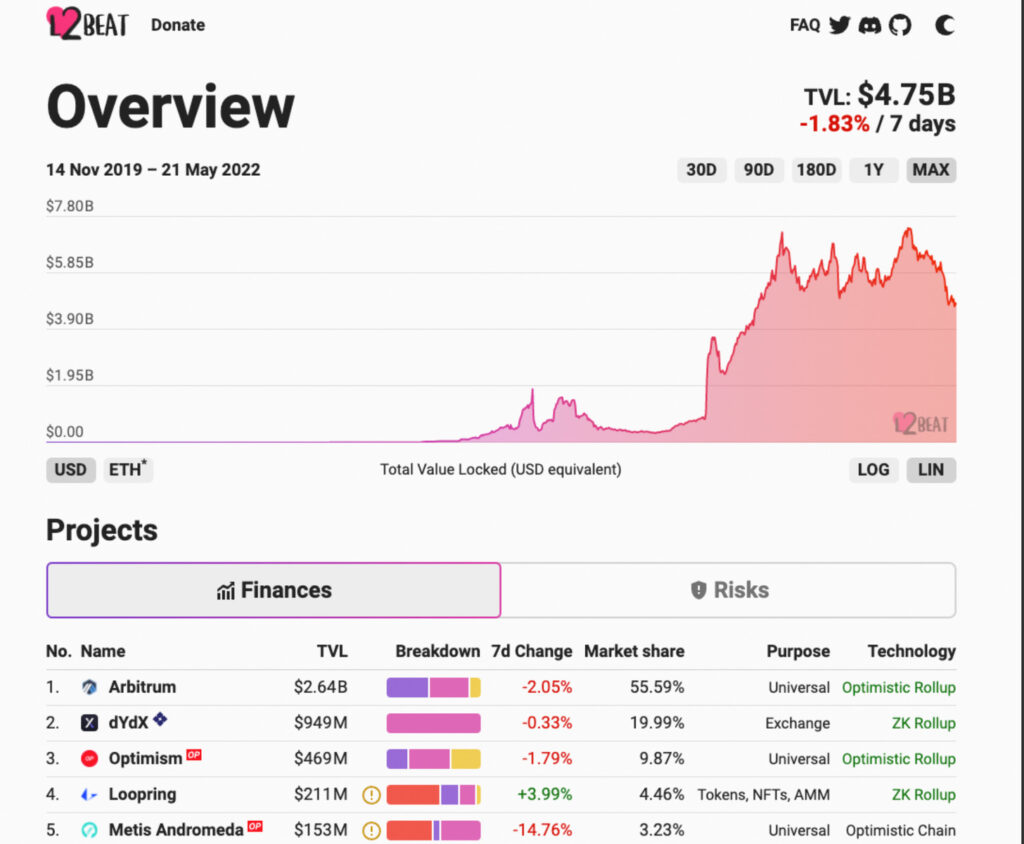 2022 is the year of Layer2, there are airdrops of optimism, hop protocol, and other major airdrops like zksync and arbitrum, which are steadily increasing in the TVL long term. The question I would like to consider is if a layer 2 solution is created, is there a need for another layer 1 chain? Layer 2 solutions were originally developed to solve the scalability problem of Ethereum. I have included a quote below from a previous article on this subject.

What is Layer2 in the first place?
Layer2 is gaining momentum, with 2022 being called the year of Layer2, optimism launching airdrops, and other Layer2 chains making their presence felt. Layer 2 is a solution to Ethereum’s scalability problem: Ethereum currently generates one block every 10-20 seconds, and the maximum amount of processing that can be put into this block (0 gas – 30 million gas) is called the block gas limit. In other words, in one second, the average (assuming the block generation time is 15 seconds and the block gas limit is 15 million gas) is 1 million gas.
In case of Ethereum transfer on Ethereum (21,000gas) → 47 transfers/sec, Stablecoin transfer (about 40,00gas) → 25 transfers/sec, Complex DeFi (1,000,000gas) → (Just) 1 transfer/sec.

This is not a fast enough processing speed at all, and the gas cost is also high. Layer2 was created to solve this processing speed and gas problem. As mentioned above, most of the current Layer 1 chains other than Eth were created to solve the scalability problem of Ethereum. Of course, there are many GameFi-specific, DeFi-specific, Metaverse-specific, etc. chains, but in the end, once Ethereum’s scalability problem is solved, startups are more inclined to move their projects there. If startups move to Layer2 when selecting a chain, other non-Ethereum Layer1 chains become worthless. It is easy to understand this if you imagine that amazon has no stores or apple store has no apps. So why move the project to Layer2? The reason is the quality of existing users and projects. Currently, Ethereum has the largest number of TVL, developers, projects, and validators. (The following is TVL, with Eth accounting for 64.23% of the total.)

Currently, Ethereum has the problem of very high gas costs due to scalability issues, but that accounts for more than half of TVL. If the scalability problem is solved on Layer2, projects launched on other chains will have no choice but to come back to the ecosystem. Does this mean that anything other than Ethereum+Layer2 will become worthless? I believe the answer is no. I believe there are two ways for Layer 1 other than Ethereum+Layer2 to survive.

One is to strengthen support with startups in Grant and Ecosystem funds, the second is to have strengths that cannot be replaced by Ethereum
The first is already a tough area for emerging chains. Near offers $800m grant and of course other layer 1 chains like Solana, Avalanche, etc. (FTM ($314M), AVAX ($180M), CELO ($100M), ONE ($300M), ALGO ($330M), NEAR ($800M). There is already a race to pull in quality projects with huge amounts of money, and it is expected that a start-up chain that has raised a few hundred million dollars will be no match at all.

The second and more important point is that most layer 1 chains currently use EVM compatibility (i.e., you can write and launch on other chains in an environment where you can write code on Ethereum), but there is a need to have unique strengths that cannot be replaced by Ethereum. In the short term, adopting EVM compatibility is important to bring in Ethereum developers (Ethereum developers are by far the most numerous), but in the long term, it will never be a competitor to Eth, but backward compatible. This means that in the short term, the emerging chains of the future will have to be able to use EVM compatibility, and substrate (polkadot’s development language) to attract developers while creating their own value chain to survive.

So what specific emerging chains have this concept? This may sound like a shill, but 5irechain has a good concept and solution that Ethereum does not address. The difference is that 5irechain uses a consensus mechanism called Sustainable Proof of Stake (the name has been changed recently, but I will use the old name this time), which is not found in Ethereum’s PoS, and this makes it easier for people who do sustainable things to benefit from it. This mechanism is reproduced on the blockchain. From the project side, this is an advantage that Eth and other layer 1 chains do not have. As there are many who are concerned about environmental issues and therefore will carefully consider carbon output when selecting their chain to build on and support in the future. Which chain will they choose: a project that focuses on solving environmental problems or a chain that creates deep structural issues where the rich get richer, like PoS?
It is worth noting that social business investments, called impact investments, are seven times larger than all VC investments. This amounts to an investment of $2.3T globally. The only chain selected for this investment is 5irechain. For more information about 5irechain, please read the articles here: Deep dive into $121M raised layer1 startup 5irechain (part1) , Deep dive into $121M raised layer1 startup 5irechain (part2):

That’s all for this issue. In the next article, I will introduce AVEM, a layer 1 chain (parachain) that has a value not found in Ethereum, based on this article.

How To Evaluate The Growth of A Crypto Project (Part 1)